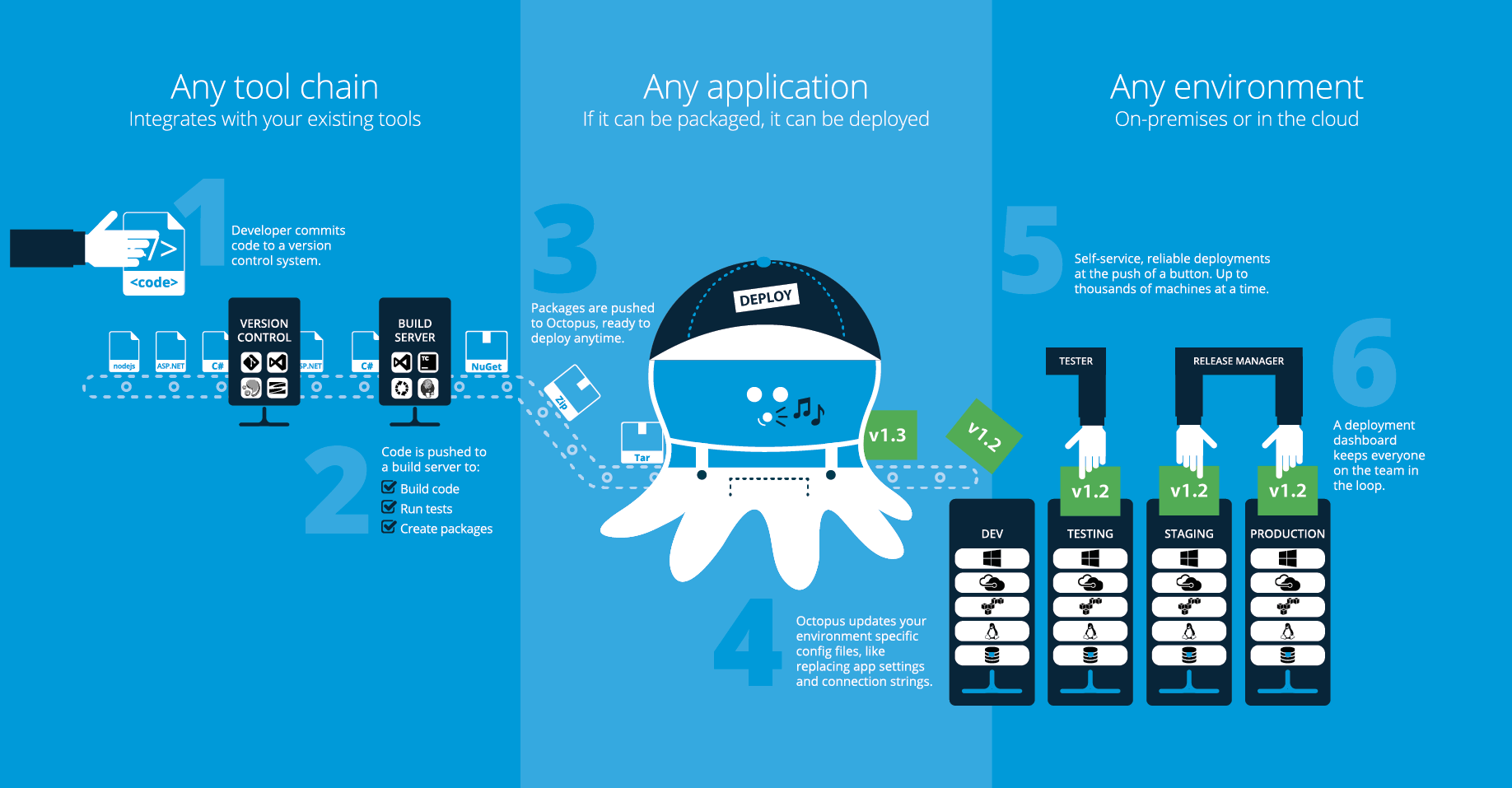 In my previous post I described how to setup an automated build for a Sitecore Helix project. In this post I’ll be covering the configuration of the automated deployment environment using Octopus Deploy.

Octopus Deploy has great documentation so I won’t be covering all the details. I will discuss the Octopus Deployment Process and Release since these have Sitecore (Helix) specific configurations.

A deployment process consists of deployment steps. A step is based on a step template and Octopus provides an extensive library of those.

The step templates which I use most frequently are Deploy a NuGet package and Add a Script:

The deployment process for our Sitecore Helix project is constructed as follows (PS for Add a Script step, NuGet for Deploy a NuGet package step):

The Remove step (2) is recommended because each deployment will only add new files to the website. We’re not installing a vanilla Sitecore from scratch each time.
By removing module specific files such as yml, config files and assemblies we can ensure we won’t get unexpected behaviors when files (or complete modules) are removed from the build.

PowerShell steps can use (custom) script modules from the Octopus Library. This allows re-use of script code and keeps the PowerShell steps succinct and easy to understand.

The following custom made modules are used:

The Disable and Enable Config Files module is useful when dealing with separate content management and delivery servers. I plan to write a blog post about that one separately and to submit the script to the Octopus Library eventually.

I’ve setup the release versioning to use the latest available version from the NuGet packages:

A release can be created automatically when Octopus detects a new package being pushed to its NuGet feed. This is configured by selecting a NuGet Package deployment step from the process. 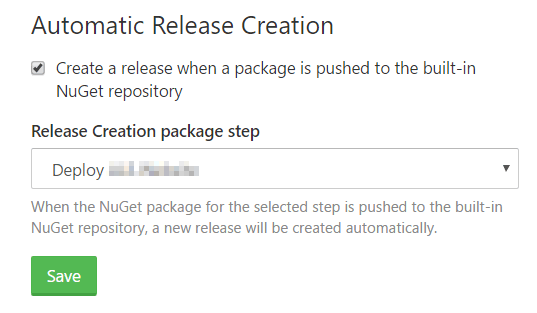 Although this functionality sounds great I would recommend not to use this when dealing with multiple packages!

When I tried this automatic release creation I experienced that releases often would contain old versions for some packages. This discrepancy was caused by new packages not being available yet on the Octopus NuGet feed when the release was created.

Octopus triggers the release creation based on one NuGet package while a Helix solution will produce many packages (in this setup). So if the package referred to in the Release Creation package step is not the last package to be pushed by the build server a release will be created in Octopus which still refers to some old packages. Yikes…

Since the build order of the projects (and thus the push of the packages to Octopus) might change it is too risky to have the release created automatically based on the presence of one package of which you assume is the latest in the build process.

It is much better to trigger the build by running a command line tool called Octo.exe. This tool needs to be installed on the build server and a post build step needs to be added which calls Octo.exe with the following arguments:

Let’s have a look at the available argument switches:

I’ve omitted the --versionand --packageversion switches in the post build job since I let Octopus determine the release number based on the latest NuGet package version available. And since all the NuGet packages are built with the same version number this is safe to use.

An alternative of using the command line tool would be to use the Octopus REST API. The OctopusDeploy-API GitHub repo contains loads of PowerShell scripts on how to use the REST API.

Multiple NuGet packages: The good, the bad and the ugly

As described in my previous post I took the approach of having NuGet packages built for each module (csproj) in our solution.

The reasons behind this were the following:

The multiple package approach also has some drawbacks:

Will I use the exact same packaging & deployment strategy for the next Sitecore Helix project?

Probably not. Although I do have (almost) everything in place now I’m not 100% satisfied with the current deployment process.

I don’t like the fact that whenever a new module has been built a deployment step needs to be added to the Octopus process. Since adding a deployment step is still a manual procedure it might be forgotten and a module will not be deployed. This is quite big risk.

I’m planning to write a PowerShell script that will locate NuGet packages within Octopus based on a naming convention and deploys these to a configurable target. Then all the current deployment steps for the Feature modules can be replaced with one PowerShell script step that will search & deploy packages matching <Project>.Feature.*.nupkg. The Foundation modules can be handled in the same way.

By just using one NuGet package for the entire solution I wouldn’t have this problem to begin with (but I’m sure I would have had other problems then ;).

But which ever route you take for you next Sitecore project, make sure you use a deployment environment such as Octopus because it enables very controlled and reliable deployments.

I always appreciate good feedback, so feel free to leave a comment here or discuss this in the helix-habitat channel on sitecorechat.slack.com.