Ever since I attended Anders Laub his presentation at SUGCON Europe 2015 about component based architecture in Sitecore solutions I have been a strong advocate of these modular principles. I even went to Pentia to learn about this in full detail.

I was very happy to see that Sitecore finally got their act together and published their Helix guidelines and recommended practices on the web.

For the last half year my team is using the modular Helix style architecture with success and it’s time to share some experiences.

Go straight to the TL;DR

Adding a new module with ease

Seeing a Sitecore Helix solution can be a bit daunting at first. The folder structure is quite deeply nested and developers need to have a good understanding what a module is composed of. Adding a new Feature or Foundation module to your Sitecore Helix solution is a time consuming and error prone task if you do it manually over and over again. Just as a learning experience it’s good to know what needs to be done so please do have a look.

Since adding a module is such a repetative task it is a perfect candidate for automation. Currently there are two Yeoman based solutions to create modules; generator-habitat and generator-prodigious-helix.

Both these Yeoman generators allow you to create a new Feature or Foundation module with ease. Both create the folder structure and the Visual Studio projects. The main difference is that generator-habitat works with Unicorn and generator-prodigious-helix works with TDS.

The only drawback of both generators is that they don’t update the solution file. So you manually need to add the generated projects into he solution (and create the module specific solution folder as well).

Because I’m lazy and don’t want to do repetitive work I set out to find another solution for this.

Since I’m more familiair with PowerShell I used that instead of the Yeoman generators (I already invested quite some time in my own solution before I became aware of the Yeoman generators). Fairly quickly I had a script that would copy a template folder to the desired destination and replace tokens for the module name, namespaces and GUIDs.

The only thing left was adding the projects to the solution. First I took a very basic approach and started parsing the sln file since it’s all plain text anyway. But it became quite a hassle to manage project relations and nesting of projects and solution folders with only GUIDs to work with. I needed a better solution. And then I met DTE.

DTE to the rescue

DTE (Development Tools Environment) or EnvDTE is the Visual Studio automation model and is used for Visual Studio extensions to manipulate the solution and it’s projects. The DTE framework (COM based) is implemented across several EnvDTE*.dll and VSLangProj*.dll libraries depending on the version of Visual Studio you’re running.

The SolutionFolder interface in the EnvDTE80 assembly captured my interest with the following methods:

In my initial attempts of using DTE I experienced quite some difficulties in creating the right types of objects and interfaces. This was probably due to not having the correct EnvDTE*.dll and VSLangProj*.dll assemblies loaded in my PowerShell script.

The PowerShell commands that can be used in the Package Manager Console are stored in a Profile.ps1 script located at C:\Program Files (x86)\Microsoft Visual Studio 14.0\Common7\IDE\Extensions\<someweirdID>\Modules\NuGet. Since that profile belongs to the console it’s probably best to not touch that one because it could be overwritten during an update.

When you type $profile in the Package Manager Console you’ll get the location of a user profile that can be used to extend the default one. In my case I got the following:

If you go to that location there might not be a profile file at all. You can then create an empty file and name it NuGet_profile.ps1.

When you make changes to this user profile while Visual Studio is open Visual Studio will not detect any changes. You can type & $profile in the Package Manager Console to reload the profile. 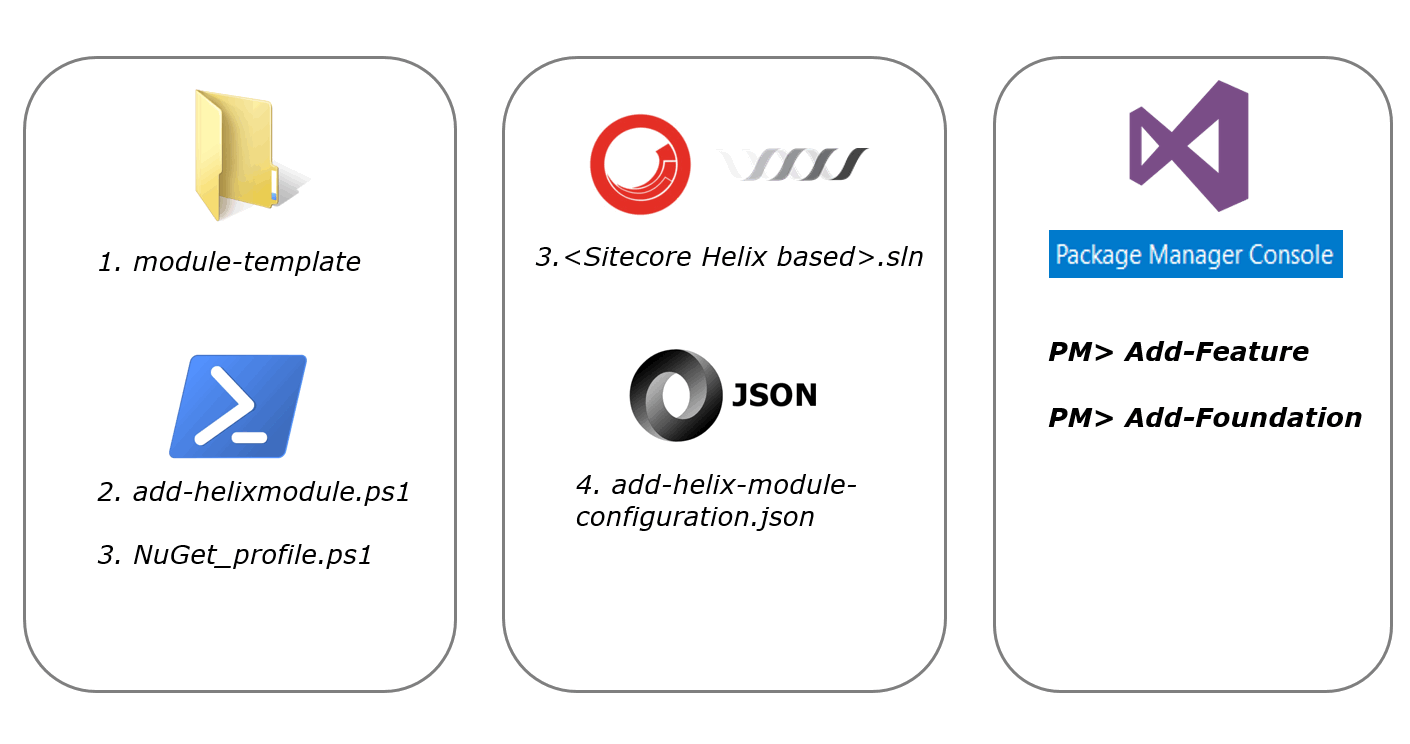 You can see it working in my fork of Sitecore Habitat: 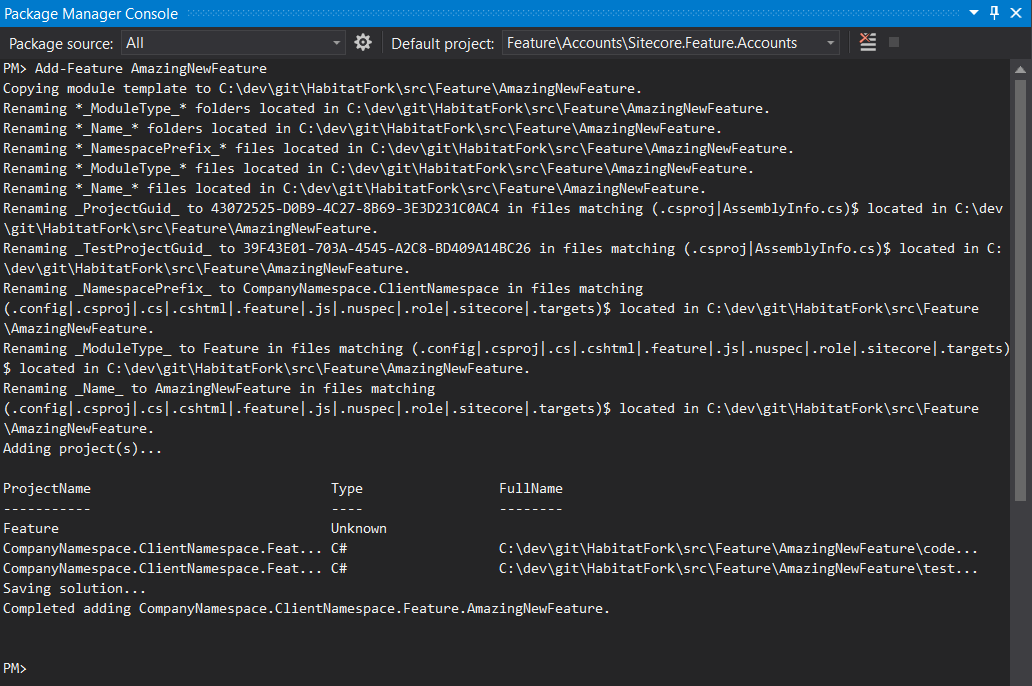 In my next post I’ll dig deeper into the inner workings of the add-helixmodule.ps1 PowerShell script.

So are we done now?

No. Currently the script only works with an existing Visual Studio solution that uses the Helix/Habitat folder structure so it heavily relies on folder names called Feature and Foundation.

Improvements I can think of now:

A whole different approach will be to investigate the experimental vs-net-dte and gulp-notify-dte projects in order to get DTE to work with Gulp. Please do let me know if you have plans to dig into this :).